Pema Khandro accepted the title of “Pema Khandro Rinpoche” in order to continue the lineage of one of the few female teachers and yoginis in Tibetan Buddhism’s history.

“I have been given opportunities that women in Tibetan Buddhism have rarely been afforded. After being given heaps of support, kindness, training by my teachers, I also have been given the life circumstances to devote my life full time to the study and teaching of Buddhism.

Then I was given an even greater opportunity of service – to use my teaching activity to continue a lineage of one of the few female Buddhist teachers and yoginis who was remembered in Tibetan history.

So, in the end, I accepted this opportunity as an acknowledgement of the interdependence that female practitioners today have with women’s previous contributions throughout the history of Tibetan Buddhism.”
– Pema Khandro The recognition of the “tulku” is a traditional way of sustaining lineages in Tibetan Buddhism. Through tulku recognition,  the heritage of past Buddhist predecessors is passed on to current leaders who will carry on the tradition. The tulku system is connected with the notion of reincarnation and the belief that the teachings of Tibetan Buddhism can be continued from one life time to the next.

Gyaldak Rinpoche grew up in Tibet and was groomed to remain there as the leader of his monastery. He was recognized as the emanation of Phakmodrupa Dorje Gyalpo, one of the founding fathers of the Kagyu lineage who was a direct disciple of Gampopa. Gampopa in turn was one of the direct disciples of the great Tibetan yogis, Milarepa.

Gyaldak Rinpoche came out of Tibet in 1991 and travelled around the world before recently settling in the Bay area where he has presided over rituals for the local Tibetan community and devotes himself to promoting Buddhism.

When Gyaldak Rinpoche and Pema Khandro first met, they spoke about Buddhism together at length and had an immediate positive connection. He told her the story of Pema Khandro, a yogini from eastern Tibet, and he announced to her and her students that he had recognized her as the reincarnation of that same female teacher who practiced in the early nineteen hundreds in south eastern Tibet.

During the following year after her enthronement at the MahaSiddha Center, Gyaldak Rinpoche and Pema Khandro Rinpoche taught the Rinchen Trengwa Chod together to her students, bringing a primary practice from the lineage of her previous lifetime and home monastery in Eastern Tibet to her North American students. At the end of the retreat when everyone gathered together to chant the practice in English, Gyaldak Rinpoche had tears visibly streaming down his cheeks, overwhelmed with joy to see Americans genuinely engaged in the practice of Buddhadharma, and overjoyed to see the continuation of Pema Khandro’s lineage. The Rinchen Trengwa Chod continues to be a central practice for Pema Khandro’s students.

Gyaldak Rinpoche gave her the title of Pema Khandro Rinpoche during her enthronement and as per the tradition, in order to honor the interdependence with the history of the lineage, this is the name she uses when teaching.

When Gyaldak Rinpoche and Pema Khandro met, she had already been concentrated on teaching the very teachings that the previous Pema Khandro was devoted to propagating. Thus, the recognition offers an additional support for the continuation of the work she has been already dedicated to.

Pema Khandro takes a practical and educational approach to her role as a teacher. She has long been an advocate of the recollection of the history of Buddhist yogis in India and Tibet. Thus it was with the motivation to continue the lineage of one of the few remembered female buddhist teachers and yoginis in the history of Tibetan Buddhism, she continues her work in offering the teachings of the Nyingma and Kagyu lineages of Buddhist Yogis.

You will find many answers to frequently asked questions about Pema Khandro here. 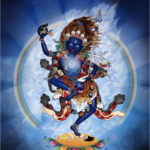 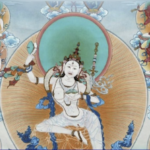